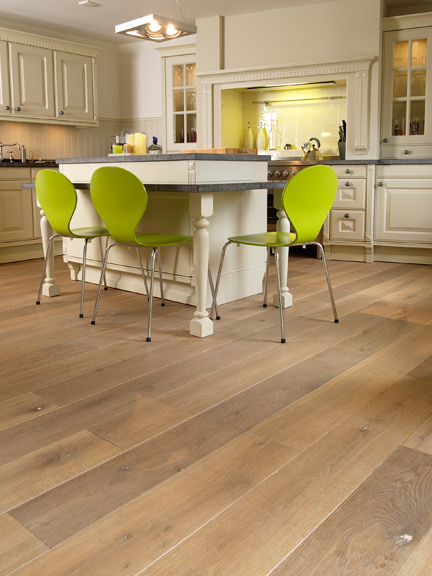 >French oak flooring entered into the US market about 20 years ago breaking in at the top echelon of the flooring market primarily in the Northeast.  Today, in the same way pharmaceuticals move from elite athlete’s, to the wealthy and on to the common man, the French oak ‘look’ has made it’s way into wider market share over that time as competition and other factors have driven pricing into more attainable levels.  In this post we’ll explore the inherent differences between French and American oak, discuss it’s unique design qualities and look at how the trend has evolved from being based on material origin to a set of common design elements.

There are a few distinct qualities that set French and European white oak apart from it’s American cousin.  One inherent difference, which is also an important distinction to winemakers is the tannin content of the European oak is higher.  Tannin, from the German word Tanna (Tannenbaum) meaning oak tree, are polyphenolic compounds found in wood that are intergral to both wine aging and the tanning of animal hides.  The higher tannin content in the white oak allows the wine to age by eating up oxygen that would otherwise spoil the wine.  Rick Merwin from Costa Mesa, CA based Fontenay has been making reclaimed French oak flooring from recovered wine barrels for the past 10 years.  “Being more highly sought after by winemakers, French oak makes up the majority of the material we reclaim from old wine barrels.  We process both the Vintage Barrel Collection of flooring as well as the Vintique Wine Racking systems from European oak.  The high tannin concentration also has an effect of making stain react more subtly with the wood resulting in different tone’s and colors than you see in American oak.”

French oak is often characterized as having a “cathedral” grain pattern that is distinct from American oak.  Cathedral typically refers to boards that show the range of grain from the straight grained quartersawn/riftsawn look and the wide open characteristics of the plainsawn grain in the same board.  Jim Oliver from Oxnard, CA based Plantation Hardwood notes “the wood itself is distinguished from American white oak by the tighter and narrower grain pattern, displaying more flat and rift grain on a single board face.” Along with this inherent difference, a distinction in the way the logs are sawn adds a unique appearance element to this product.  The log or boules are generally “live-sawn” in a through and through manner.  Sawing straight through the log achieves the varied grain patterns within an individual wide plank board distinctly different than what is achieved when sawing for the highest yield of grade lumber.  Live sawn planks that have not been sawn to produce the highest yield will naturally exhibit all the varied characteristics of the log including knots, pith, mineral streaks etc. prominently throughout each board.

French oak also exhibits a more yellow appearance than it’s American counterpart which adds a different dimension to both natural finished floors as well as what can be achieved with stain.  “It’s probably the most prominent difference between European and American oak” notes Merwin, “over time the French oak seems to amber to a more natural brown tone than our oaks”.

What started as a trend based on the origin of the material, the demand is now being driven more by the look of the final product than the origin.  “Early on, French oak represented ‘old world’ flooring that was desirable for the growing trend in residential architecture for European elements of style” Oliver adds.  As demand rose the trend moved from being called French exclusively to European as the demand for lower priced alternatives, beyond the constraints of the French supply, moved into Eastern European suppliers from Romania, Hungary and Poland.  “Today, European oak is as much of a concept, as an origin”. What is that look?  Long planks, wide widths, and all the natural characteristics of the lumber exhibited throughout each individual plank.  “The wood is important and to some they’ll always demand the French/Euro origin but today the trend is being driven by the ‘look’.  At Plantation Hardwood Floors our perennial challenge as a custom flooring manufacturer will be creating the authentic ‘look’, while providing cost-effective ownership”.

Recommended reading:  The complete list of European oak suppliers listed in the Hardwood Floor Mag can be seen here.